I remember a calendar. A gift from a family friend who’d been on holiday to the Netherlands. A different Dutch Cheese for every month. Most of the pictures were photographs, but there was a map of the different cheese areas, and a couple of paintings. Still Life with Pewter Jug, Fruit and Cheese plus another whose name I’ve forgotten, but which also dated from the early 1600s—from the period known as the Dutch Golden Age.

Still life painting flourished as a distinct genre during this time, the opening decades of the seventeenth century, a time of unprecedented prosperity. Instead of portraits and religious scenes, artists started painting things: candlesticks, canisters, flowers—and food. Lots of food. Local produce as well as exotic ingredients shipped in from the various Dutch colonies. The spectre of slavery hovers over these tables of plenty.

Cheese is centre-stage, an anchoring presence, in many of these delicious paintings. It was, after all, one of the pillars of the Dutch economy. Its meaning mercantile and domestic rather than religious. Near the beginning of Daniel Defoe’s Robinson Crusoe, published in 1719, the newly ship-wrecked Crusoe compiles an inventory of his salvaged cargo: ‘bread, rice, three Dutch cheeses … ’

I’m fond of the novella form, and in 2007, during a stay in Amsterdam, I discovered Cheese. Kaas in Dutch. It’s a comic gem, ‘Edam’s great moment in world literature,’ according to its English publisher. Written by Willem Elsschot, a Flemish author and advertising executive, published in 1933, it’s both absurdly funny and terribly sad. Frans Laarmans is a shipping clerk in Antwerp. Pushing 50, on the corporate road to nowhere, he wants respect more than riches. To that end he becomes the Belgian sales agent for a Dutch cheese exporter and takes delivery of 10,000 wheels of Edam. But instead of concentrating on shifting his supply he focuses on setting up his office—buying a desk and typewriter, ordering letterhead, and so on. Meanwhile the cheese sits there, crates of it …

‘I stopped outside a cheese shop to admire the window display … Huge Gruyères as big as millstones served as a base, and on top of them were Cheshires, Goudas, Edams and numerous varieties of cheese that were entirely unknown to me, some of the largest with bellies slit open and innards exposed. The Roqueforts and Gorgonzolas lewdly flaunted their mould, and a squadron of Camemberts let their pus ooze out freely. An odour of decay wafted from the shop.’ From Paul Vincent’s English translation, 2002.

Must admit I identify with Laarmans on the matter of stationery. When I’ve got a deadline or some other urgent task, there’s nothing like a nice delaying trip to Officeworks or Dymocks to buy that all-important pencil or plastic wallet.

But it’s not only fine art and high culture. ‘That’s it Cheese! We’ll go somewhere where there’s cheese!’ exclaims Wallace in the animated short A Grand Day Out. And off they rocket to the moon, because as everybody knows, the moon is made of cheese. It plays a role in most of the Wallace & Gromit films, and in A Close Shave Wallace declares Wensleydale his favourite cheese—a preference credited with boosting sales of the crumbly Yorkshire staple. 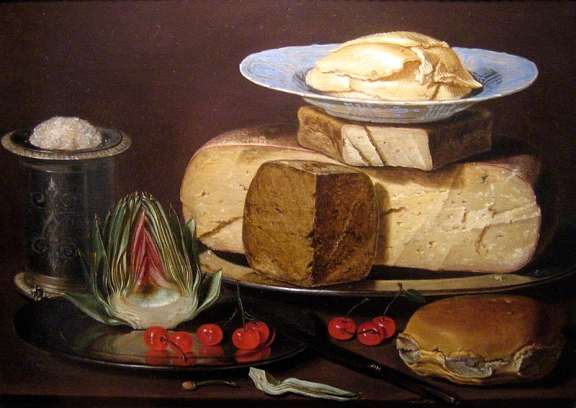 Still Life with Cheeses, Artichoke and Cherries was painted by the Flemish artist Clara Peeters circa 1625. I doubt it was the other painting in that calendar of Dutch cheeses, but it’s interesting to note that there were women artists of the Golden Age.

Traditional art history read these luminous still lives as expressions of disapproval, criticisms of luxury and sinful excess. But others question that interpretation and argue for a more layered understanding. Me, I see them as feasts for the senses, celebrations of both life and life’s transience. The French term for a still life is ‘nature morte’ which translates as dead nature. Some of these Golden Age still lives include a dead fish or fowl, a peeled fruit starting to rot, even a part-eaten pie. Many of the featured cheeses are wedges, half-rounds, blocks with a corner cut off—someone’s breakfast perhaps? Peeters’ painting is more of a close-up than many. If you look carefully at the large pale cheese on the silver plate, you can see knife marks, slightly darkened edges where it has begun to dry out, a gouge where a plug sample was removed for testing.

These reminders that worldly pleasures are fleeting, remind me of those much quoted (but alas rarely referenced) lines by W H Auden: ‘although the great artists of the past could not change the course of history, it is only through their work that we are able to break bread with the dead, and without communion with the dead a fully human life is impossible.’ BTW it’s from his lecture/essay Words and the World published in Secondary Worlds, 1968.

As for that tear-off calendar, well, it did teach me that there was more to Dutch cheese than waxy red-coated Edam. My favourite was—still is—Leiden (or Leyden). That’s the one with cumin (and sometimes caraway) seeds.

One thought on “Cheese in art”