America is cheesy. Very cheesy, and I’d had enough of it. My mission was to find a lunch that didn’t involve cheese.

I’m just back from a research trip to the US, most of which I spent in New Haven, Connecticut. My previous New Haven visit was in March/April 2012, and based on that experience, I was planning to write about food deserts …

Food deserts are neighbourhoods where residents have little or no access to fresh and affordable food within walking distance or a short public transport ride. Twenty years ago the term didn’t exist. That some areas had more bottle shops and fast food outlets than decent supermarkets was just a fact of life. The typical explanation is a lack of demand. That’s PR-speak for: the locals are poor and won’t buy enough to guarantee the required level of profit. Until a couple of years ago (when a Stop & Shop and a large grocery store-cum supermarket opened) New Haven’s downtown was a food desert, and—despite various community garden projects—parts of the city are still officially classified as such.

My mental sketch map of New Haven has Yale University in all its autumnal and academic splendour surrounded by a vast sea of social disadvantage. Every morning I put a handful of $1 bills in my pocket to give to people begging on street corners, or huddled on church steps in the hope of a soup kitchen. When my day’s supply of notes is gone, that’s it until tomorrow. I came up with this strategy on trips to India—never did I imagine I’d need it for North America.

It was the food carts that steered me away from food deserts. I was vaguely aware of them my first visit, but this trip I discovered them big time. There are apparently 3 main concentrations in New Haven: Long Wharf, the part of campus known as Science Hill, and the one I most frequent which occupies a stretch of Cedar Street outside the Yale-New Haven Medical Centre. The cuisines on offer here are predominantly Asian, so a non-cheese lunch should be no problem. There are stir-fries, Taiwanese noodle soups, bibimbaps and—wow, Bengali burritos. I’m fascinated by cultural and culinary hybrids, so of course that’s what I order: one beef and one vegetarian. Then unroll them to see what’s inside: onion, cabbage, carrot, lightly spiced beef or potato all topped with chilli sauce, a yoghurt/mint dressing and a sprinkling of lettuce. The enclosing bread is a paratha, or maybe a roti—I’m never entirely sure of the difference between these 2—and the whole thing is delicious. Cheese free and not too big. Like the original Mexican burritos before they got supersized into American fast food. 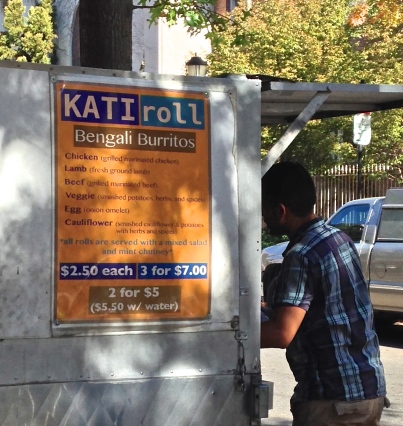 The burrito has a lot of creation stories, but most agree that it arose in northern Mexico and migrated along with the farm labourers to California and elsewhere. It existed on the culinary borderlands for several decades before becoming widely available in the 1960s—in the US. I don’t know when burritos first appeared on Australian menus …

The Tex-Mex chain Taco Bell opened in Sydney in 1981, relaunched in 1997, and by 2005 had pulled out of the country. Should you have a sudden craving for their fare, our nearest Taco Bell is now in Honolulu.

A burrito consists of a wheat flour tortilla wrapped around a filling. In Mexico they’re generally small and slim, with only a couple of ingredients—a little meat or fish, plus rice or beans. In the US burritos are longer and fatter, stuffed with way more than the basics.

The land of plenty. It drew the poor and huddled masses across the Atlantic, and it permeates American politics, values and eating habits. The belief that bigger is better seems to hit some kind of national sweet spot. Everything becomes bigger, not just burritos. Take nouns—US English supersizes them with extra syllables: transport becomes transportation; wonder lengthens into wonderment.

Salsa overtook ketchup as America’s favourite condiment a while back. Now tacos and burritos have pretty much lost their ‘ethnic food’ tag, and tortillas outsell burger and hot dog buns. The food of its southern neighbour is America’s food of choice even as armed vigilantes trawl the US-Mexican border for illegal immigrants. 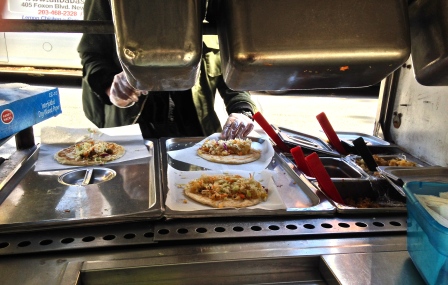 You can tell a lot about a place from browsing the cooking section of its bookshops. So having read about this conquest by quesadilla and a million jars of salsa, I decide to check out New Haven’s biggest bookstore. This  branch of Barnes & Noble has shelves of special diet books, loads of picture books about cupcakes, and plenty about modern American cooking using local and/or healthy ingredients. France is well represented, likewise Italy, and there’s quite a large Jewish section—larger than we’d see in Australia. By contrast, Asia is scarcely a dozen titles. I expect Mexico to be well-supplied … but it’s not. I count only 5 books. Wow again. This cuisine’s history may barely register in the official American story, but go to the supermarket and you find aisles packed with hot sauce, corn chips, frozen enchiladas, DIY tamales, etc. And there are Latino restaurants and food outlets all over the place. Maybe that’s it? Mexican food has been embraced with gusto—as an everyday, workaday, ‘blue-collar’ cuisine.

Once upon a time in Australia we got all our Mexican tastes by way of the US—heavy on sour cream, short on subtlety. Taco Bell may have upped and left, but over the past few years other Mexican themed franchises have spread across the country: Mad Mex, Montezuma’s, Guzman Y Gomez, Taco Bill’s. But alongside this ‘casual dining’ expansion I’ve noticed growing interest in Mexico’s rich and incredibly varied regional traditions. No mountains of guacamole going brown at the edges. No blizzards of cheap grated cheese.

The burrito is portable, adaptable, a constant work in progress. I’ve seen burritos wrapped around leftovers; around salad and sautéd tofu; Korean-Mexican fusions with kimchi and bulgogi; kosher burritos packed with pastrami; breakfast burritos with bacon and egg and the inevitable cheese. As for the Bengali burrito, a.k.a. kati roll, it’s not so much cross-culinary invention as an exercise in linguistics. A description for locals more familiar with Mexican food than that of the subcontinent. The kati roll is a popular street food from Kolkata. Like the burrito, there are many stories about its origins, and like the burrito it accommodates a diversity of fillings: Thai and Chinese as well as pan-Indian.

And the exchange runs both ways. Bangalore hosted India’s first Taco Bell in 2010, and in 2012 the company introduced its own take on the kati roll in its Indian stores: the ‘Kathitto’ is a combination of kati roll and Mexican-inspired burrito.

My desire for cheese-free lunches takes me back again and again to the food carts on Cedar Street. Don’t get me wrong, I like cheese—in its place. Cheese that tastes of something. It’s bland, mass produced American ‘Jack’ cheese I dislike. I can’t understand why anyone with any degree of kitchen literacy would buy it. Until I read about Dairy Management …

As well as pushing to expand the use of cheese in processed foods and home cooking, Dairy Management teamed up with Domino’s to develop a new line of pizzas with 40% more cheese. The pizza may have improved Domino’s financial health, but one slice contains around two-thirds of the maximum recommended daily intake of saturated fat. And you know what’s really bizarre? Dairy Management is a marketing creation of the US Department of Agriculture—the same agency at the centre of a nationwide anti-obesity drive—Go figure. The cheesiest of the Domino’s bunch is called the Wisconsin 6 Cheese Pizza. It’s not available—as far as I can ascertain—in Australia. But if it were, this is what you’d get: 6 cheeses on top (mozzarella, feta, provolone, cheddar, Parmesan & Asiago) and 2 more in the crust. Sounds like it should come with a coupon for the cardiac unit, doesn’t it?

The Bengali burritos are popular with staff and students from the hospital and surrounding departments. The food carts are an important part of New Haven’s eating environment, and they’ve shifted my thinking about New Haven, and about American food more generally. Yes, I can see the downside: the poverty, the waste, the wages so low that people have 2 and 3 jobs to survive and no time to shop and cook. But I can also see that it’s a country where fusion—culinary and otherwise—occurs with ease and frequency.