‘Beautiful spring weather,’ wrote George Orwell in 1940. ‘Heard the cuckoo (first time). Many midges about now. Bullace blossom pretty well out.’ The man who took us down The Road to Wigan Pier and into the dystopia of Nineteen Eighty-four once said: ‘Outside my work the thing I care most about is gardening.’ And his diaries bloom with sunflowers, cabbages, marigolds—and plums. Because that’s what the bullace is: a member of the large plum family.

Plums herald the glorious glut-months of late summer, when stone fruits are cheap and plentiful—and autumn is just around the corner. (It’s probably un-Australian, but I don’t like summer and am always relieved when we reach the season’s hinge.) You might these days find more varieties of plums at growers’ markets than in the supermarket, but I bet you won’t find any bullaces. I’d never heard of them until a few years ago. I was visiting my mother in England; it was the end of September and the hedgerows were a mass of plants grumbling for sun and air. Heavy with thistle-down, rose-hips, and a small oval fruit my mother popped in her mouth before I could say: Don’t eat that! It could be poisonous, you don’t know what it is.

But she did know what it was: a bullace.

Archaeologists have unearthed bullace stones dating back to Saxon Britain and before, but there’s no consensus about whether the bullace is an English native or an early import. For horticulturalist H V Taylor (The Plums of England, 1949) it’s ‘the only truly English plum’, whereas John Lewis-Stempel (Foraging: The Essential Guide to Free Wild Food, 2012 ) says it’s ‘not native to these isles’ and was brought to Britain by the Romans.

Together with damsons, the bullace belongs to the insititia subspecies of Prunus domestica. Unlike damsons though, bullaces come in different colours. Some varieties are ‘Black’ i.e. dark bluish purple, others have yellow flesh and are called ‘White’. Dark varieties of bullace resemble damsons, but they usually ripen 4—6 weeks later. The dark varieties also get confused with the closely related sloe  a.k.a. blackthorn. Actually the presence or absence of thorns is an easy way to distinguish the two: If the tree or bush is thorny you’re looking at sloes. Bullace plants are thorn-free. 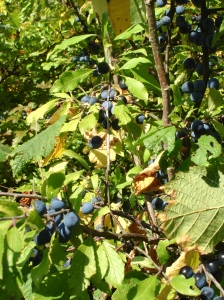 The bullaces my mother and I picked that day had yellowy-green skins with a red blush. Their flavour was tart, so I made them into jam. During the first decades of the twentieth century commercially produced plum jam was the default, and many low-income households saw no other kind. Decades later, plum jam was still the cheapest option. All the jam we ate when I was growing up was homemade, but I remember seeing tins of IXL plum jam imported from Australia in the school kitchen.

According to my mother, bullaces and damsons make a tastier, more complex jam than regular plums—which can produce a bland confection. Even so, she recommended the addition of cinnamon or orange zest and/or a slug of Cointreau to ‘liven up’ my bullace jam. Another option is to gather some blackberries and crab apples along with your bullaces and make an autumn hedgerow jam.

Do we have bullaces in Australia? That wonderful reference The Complete Book of Fruit Growing in Australia mentions them briefly, by way of background, in its chapter on stone fruit. But I’ve never seen bullaces here, and I suspect most contemporary gardeners would agree with Walter P Wright (An illustrated Encyclopaedia of Gardening, 2010) that the bullace is ‘a fruit hardly worth growing’. I don’t think that, nor did the cooks of the past: Mrs Beeton suggested bullace pudding as part of a Sunday menu; you come across recipes for bullace cheese (a kind of plummy fudge) in a number of nineteenth century cookbooks, while The Country Housewife and Lady’s Director in the Management of a House, and the Delights and Profits of a Farm, circa 1732, tells you how to preserve your harvest:

‘Take your Bullace before the Frost has taken them; let them be fresh gather’d, and clear Fruit, scald them in Water: then take their weight in fine Sugar, with a little Water, and boil it to a Syrup; then put in your Bullace, and boil them till the Syrup is very thick, and your Fruit very clear.’

I’ve made damson curd (like lemon only with damsons) and because bullaces have a similar sharpness I reckon you could also make curd with them. Odd things curds, a preserve but not quite a preserve … a subject for anther post perhaps?

What else? Well, bullace vodka, of course. Lots of recipes for this, but here’s mine: For every litre of vodka, add about 450 grams of bullaces, and about 100 grams of sugar. Wash the bullaces, remove any leaf litter and pierce the skin of each fruit with a knife-point. Put them into a large glass jar, add the sugar (taste it in a month and add more sugar if you want a sweeter taste) and vodka. Make sure the lid is on tight, and shake. Store in a dry, dark place. The first few weeks, give it a daily shake, then once or twice a week. It’ll be ready in 3-4 months, the sugar will be gone and it’ll have a slightly treacly texture. Decant it carefully through a fine mesh into a bottle/s. Makes a nice gift—or you can drink it yourself.

Śliwowica or slivovitz is produced commercially and in back rooms and outhouses across central and eastern Europe. The name derives from the various Slavic words for plum. It’s śliwka in Polish, śliwki for plums plural, and the spirit distilled from them (śliwowica) gets translated as both plum vodka and plum brandy. Amongst Jewish communities śliwowica is a popular tipple during Passover when grain-based alcohols are forbidden. It’s usually a clear liquid, but your bullace vodka will be either inky-dark (like sloe gin) or a deep rusty red, depending on whether you use black or white bullaces.

This photo isn’t enough of a close up to see them, but it’s one of the hedgerows in north-east Hertfordshire where we collected our bullaces that day in September. I can’t say whether they were wild, garden escapees, or some kind of hybrid because, as H C Watson wrote to Darwin in 1855, ‘between the plum-tree of the garden & the sloe-bush of the hedges, there exist numerous intermediate forms or links’. What I can say is that during the late eighteenth and nineteenth centuries fruiting trees and shrubs like sloe and bullace were sometimes planted around the edges of enclosed fields and woodlands to provide food for the peasantry …

Sydney, 1914, a visiting English geneticist called William Bateson gave a lecture about heredity. I’m paraphrasing, but he used this analogy to explain the nature/nurture relationship: The peasant was a bullace, the upper class a cultivated plum. With the right nurturing the bullace could become a better bullace, ‘but plums they can never be.’ Hmm.

I began this post with a writer so I’m going to end it with 2 more literary references to the bullace.

Instead of the familiar ‘sloe-eyed’ how about this comparison from a seventeenth century ballad A Sing-Song on Clarinda’s Wedding by Robert Fletcher:

And from Christina Rossetti’s Goblin Market:

Pomegranates full and fine,
Dates and sharp bullaces,
Rare pears and greengages,
Damsons and bilberries,
Taste them and try … ”’

This long narrative poem is about sisters Laura and Lizzie, and temptation: One sister succumbs and is soon wasting away. Can sisterly love save the day? As poetry I don’t find Goblin Market terribly interesting. What is interesting is that although Laura partakes of the forbidden fruit, she doesn’t suffer the fate of most ‘fallen women’ in Victorian literature. She doesn’t die, quite the opposite: she lives to tell the tale. Bit like the bullace, in fact.

One thought on “Have you heard of the bullace?”