I’ve been chasing themes through archives. Always interesting, but one of the things I particularly love about this kind of research is the serendipitous discoveries you make along the way.

Because of the project I’m working on at the moment, my culinary findings have a thistly focus.

Under the heading Lovely dish of thistles! The Australian Women’s Weekly of 7 December 1966 published correspondence from several readers who cooked with weeds and wild plants. My transcript of the two letters that mention thistles is below, and here’s the link to the whole column.

‘Like Mrs. Miller Foster, who cooks stinging nettles, I, too, like some of the natural foods. Some people steam milk-thistles, but I prefer the young leaves cut up and added to lettuce salad. Dock-weed pie was a favorite with the old pioneers when rhubarb was not available. The stems are cut up, boiled with a little water with the addition of sugar and lemon juice or tartaric acid, then put into a pie-dish and covered with a pastry crust. Stalks of rhubarb added give more flavour and colour.
$2 to Mrs. S. Campbell, Toowoomba, Qld.’

‘My item of free food is young milk-thistle leaves. Cut up like lettuce, with onion and apple added, it is a tasty salad dish. It is also good eaten in a sandwich with cheese.
$2 to Mrs. L. E. Collins, Wallangarra, Qld.’ 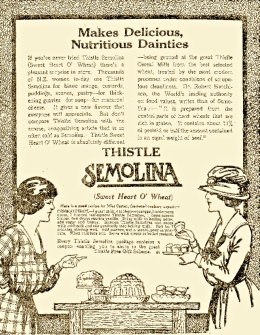 Advertisement for Thistle Semolina from New Zealand’s Wanganui Herald of December 1919. If you’d like to read the text of the ad, here’s the link to it.