‘There was a clean kitchen with tin pots and pans, strings of garlic hanging from the rafters, a neat larder stocked with pickle barrels, jars of ajvar and onions and rose-hip jam … ’

That’s from Téa Obreht’s 2011 novel The Tiger’s Wife. She’s describing the house where the narrator’s grandfather grew up, in Yugoslavia as was—although as far as I can remember, the country is never actually named. The book interweaves the grandfather’s richly-coloured recollections with the narrator’s coming-of-age during a/nother time of political strife.

Back to ajvar, pronounced ‘eye-var’. What is it? Well, it’s a roasted capsicum condiment, also known as Serbian caviar (Spriski ajvar), but in fact popular in so many countries that it’s difficult to determine the precise origin. In The Food and Cooking of Eastern Europe Lesley Chamberlain reminds us that Serbia as much as Hungary is the home of the vegetable the British and Americans call peppers and we know as capsicum. The word ajvar most likely derives from the Turkish havyar which translates into English as caviar—although there are no fish roe involved in ajvar, be it from Serbia or elsewhere. From the fourteenth century until the early twentieth, much of the Balkans was under Ottoman rule. Not surprisingly, local cuisines picked up flavours and culinary practices from their eastern rulers, and several traditional Balkan dishes share common roots with those of Greece and Turkey. I reckon the borrowing probably went both ways, because food doesn’t recognise national borders; it belongs to the people who grow, prepare, and eat it. 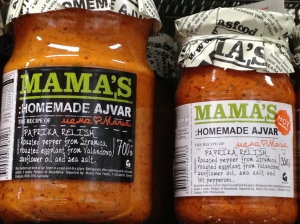 In the early 1980s I travelled in Yugoslavia. The country was still part of the Soviet bloc and my food memories are not positive: a lot of gristle and grey. A bright spot—both literally and flavour-wise—was ajvar. Especially if it was homemade. The ajvar I eat in Australia is shop-bought not homemade. And despite the fact that most recipes you’ll find in cook books or online add eggplant to the mix, the ajvar I buy usually consists of just roasted red capsicum with garlic, salt and olive oil. Smooth or chunky, it comes in 3 levels of spiciness: sweet, mild, or hot. I’ve only ever seen it made from red capsicum, but in Mediterranean Cooking, Paula Wolfert describes it as ‘Adriatic eggplant and green pepper paste’.

Part of the winter store cupboard along with preserved chillies, pickled cabbage, marinated plums, cherries and anything else you can fit in a jar and conserve for the cold months, ajvar is versatile. It’s a dip, it’s a relish, it’s a salad, a spread, a side-dish, it’s go-anywhere, add-to-anything, utterly delicious, utterly addictive stuff. Often served with grilled meat, I like it with a rustic omelette and a slice of sour dough. Or with yoghurt, humus and warm fingers of Turkish bread.

I imagine recipes passed down the generations and across the oceans. The stories we tell about the old country and the new life and how we migrated from one to the other. I imagine the sweet, smoky breath of roasting vegetables and women with babushka scarves stirring huge pots and talking about the good old days when everything tasted better. Even if it didn’t.

I took these photos in the Hamilton IGA in Newcastle a couple of months ago. I don’t know if the demographics bear this out, but I always have the sense of a strong Slavic presence in Newcastle. Evident in these rows of ajvar on the supermarket shelf, obviously, but also there, albeit less obviously, in other aspects of the city.

In the deli section of my local IGA, they sell tubs of something called ‘Capsicum Turkish Salsa’ which looks like ajvar, and tastes … mmm, like a hot ajvar with a hint of cumin.

Towards the end of The Tiger’s Wife, in the fictional town of Sarobar (read Mostar of the destroyed bridge) the grandfather and another man order up a magnificent last supper. To a surround soundtrack of gunfire and explosion, they sit, sole customers, on the balcony of a once-grand but now almost deserted hotel. ‘“Can I entice the sirs with some mezze?” the old waiter says. “We have an excellent ajvar with garlic … ”’