Café spinach is tricky. I’ve learnt to ask now before ordering: is the spinach cooked or raw? Because I love it cooked but dislike it raw. I agree a hundred per cent with Mark Bittman, who wrote in The New York Times a couple of years ago, that Spinach is a Dish Best Served Cooked.

Spinach: does anyone really love eating it raw? 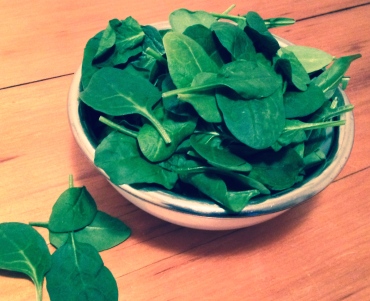 I imagine those mixed leaf salads every café and bistro seems to serve—at least in Sydney—are cheap and easy to throw together. No cooking skill required, and here’s hoping half a plate of miscellaneous leaves will disguise the smallness of the accompanying quiche or pie or whatever. One café lunch—before I got wise to the raw spinach thing—I ordered smoked salmon. When it arrived you needed a search party to find it amongst the acres of salad leaves.

It would be a real pity if this preponderance of raw leaves put people off spinach because it’s a wonderfully versatile and tasty vegetable. As well as a nutritious one. And it’s so quick to cook. Stir-fry it with garlic and chilli; steam it and serve with pepper, nutmeg, grated Parmesan and the merest dash of butter or light cream; steam and serve cold as a Korean style side-dish with drizzles of sesame oil and soy. Mix it with cheese, egg and parsley in a Turkish börek or a Greek spanakopita. And saag aloo, a dry spinach and potato recipe from northern India is simple to make and a sure-fire favourite.

Spinacia oleracea originated in Persia and the name ‘spinach’ comes via Arabic from an old Persian word aspanākh.

When I was first in Australia, what’s called English spinach wasn’t widely available. I had to substitute silver beet, which is fine in itself (I like all leafy greens if they’re cooked) but it has its own taste and texture and they’re not the same as Spinacia oleracea. Luckily the spinach called English is now in ready supply. Is it Asian cooks and market gardeners we have to thank for this? I bet it is.

The only other thing to say about spinach is that it’s a terrible shrinker. When you cook it, it reduces to less than 15% of its original volume. Which may be why so many restaurants and cafés opt to serve it raw—no shrinkage.