Trifle with your heart
booze-soaked cake, fruit and custard
sweet labour of love.

I started this Year of the Ox writing haiku. I actually prefer another Japanese poetic form, tanka, which has five lines and thirty-one syllables to haiku’s three and seventeen—but that’s a post for a different blogsite. Anyway, my haiku-writing took a culinary turn and up popped trifle.

About the trifle
classic, chocolate, break the rules
no one-size-fits-all.

January moved into February and I moved into experimenting with trifles. Inspired by a wonderful book in The English Kitchen series: Trifle by Helen Saberi & Alan Davidson. Their book contains scores of trifle recipes spanning more than five-hundred years, and is a real celebration of this versatile dish whose variations seem ‘as infinite as stars in the sky’. 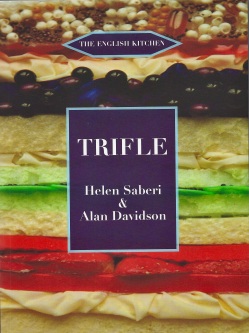 Tasmanian trifle, temperance trifle. Inexpensive, exotic, summer and strawberry trifles. A trifle old-fashioned, a trifle on the familiar side, a trifle too much. Although its name suggests something trivial, something of no consequence and little value, there’s a school of thought that says trifle is one of Britain’s greatest contributions to the global dessert trolly. A trifle can be a sophisticated indulgence; it can be a showy concoction whose appearance belies the simpleness of its making. That’s the beauty of trifle: it’s incredibly easy to make, mostly assemblage, in fact.

When it comes to trifle, jelly is controversial. Does it belong? Yes, no, maybe occasionally. I’m in the ‘Just Say No’ to jelly camp, but if other cooks wish to include it, that’s their choice. There are no hard and fast rules when it comes to trifle. You make it to suit your own taste. Because my partner follows a low cholesterol diet I hold the whipped cream, and I’ve come to prefer my classic, quick and easy trifle (swiss roll, sherry, mixed berries, vanilla custard) minus cream. When it comes to my chocolate trifle though, I favour a splash or two of pouring cream. 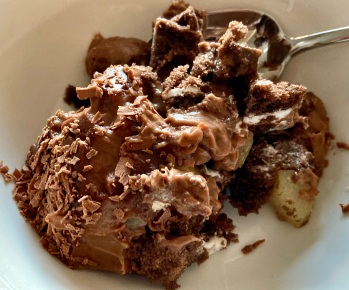 I make my chocolate trifle with slices of shop-bought chocolate cake soaked in amaretto. Then a layer of cherries, stones removed, and chopped pears. You could use good quality canned or bottled pears, but this time I’ve poached fresh pears to the desired softness. Top that with dark, velvety chocolate custard. Put it in the fridge to set and scatter with flaked almonds before serving. It tastes a bit like a gooey black forest gateau with a hint of tiramisu.

Yes, the trifle has travelled. Helen Saberi & Alan Davidson’s book contains recipes not only from Britain, but from places further afield: Trinidad, North America, Scandinavia, Australia, and India, where it was a feature of the Anglo-Indian menu. Trifle prints a recipe from the wonderfully titled Indian Domestic Economy and Receipt Book …  comprising numerous directions for plain wholesome cookery, both Oriental and English, with much miscellaneous matter, answering all general purposes of reference connected with household affairs likely to be immediately required by families, messes, and private individuals, residing at the presidencies or out-stations. The author was one Dr R Riddell and it was first published circa 1853.

I began this post on a literary note, so I shall end on one. This is from E M Forster’s 1924 novel A Passage to India. Miss Adela Quested travels to the subcontinent expecting to become engaged to a British magistrate in the city of Chandrapore. During the meal described below, she begins to have second thoughts …

‘ … to dinner came Miss Derek and the McBrydes, and the menu was: Julienne soup full of bullety bottled peas, pseudo-cottage bread, fish full of branching bones, pretending to be plaice, more bottled peas with the cutlets, trifle, sardines on toast: the menu of Anglo-India. A dish might be added or subtracted as one rose or fell in the official scale … but the tradition remained; the food of exiles, cooked by servants.’