I was in Amsterdam for a couple of weeks in July. It reminded me how much I’ve always liked the city—although July is not the best time to visit. I was last in the Netherlands about 6 or 7 years ago, and my culinary memories of that stay are packed with bread and sandwiches. This time I wanted to go to town with the cuisines of former Dutch colonies—Indonesia and Surinam in particular. The food and cooking of the Indian subcontinent is everywhere in Britain, so I assumed it would be easy to find plenty of what I was looking for in Amsterdam. Not so. Maybe I was in the wrong part of the city? Maybe the cuisines of its ex colonies haven’t had much impact on Dutch eating and food culture? Maybe I need to do more research before any future trip?

So I more or less gave up on that quest and resigned myself to a fortnight of bread, bread, and more bread. Look, the Dutch do bread well, especially fruit breads, but there really are only so many sandwiches a girl can eat. 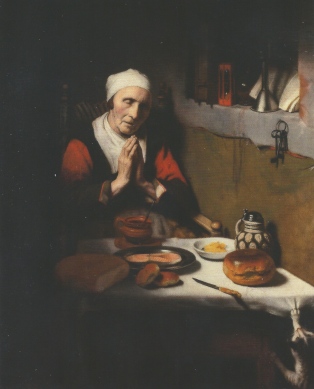 I went to the Rijksmuseum to look at their still lives. Early to avoid the crowds and queues. I found less cheese on the walls this time. This painting of an elderly woman at prayer by Nicolaes Maes is titled Prayer without End. Hmm … could she be praying for a meal that doesn’t involve a lot of bread?

The only other ‘cheese painting’ on display was one from about 1615 by Floris Claesz van Dijk. More generally, I noticed that as well as peel, cracked nuts and half apples, all manner of hungry insects populated these seventeenth century still lives. Reminders of the propinquity of death and decay.

After slim pickings on the cheese in art front I turned my attention to the artistry of cheese shops. The produce on offer was green, red, orange, brownish, almost white, and every shade of yellow. Row upon row of Edam and Gouda flavoured with different herbs, spices and weeds. Given my interest in edible weeds, of course I had to try what was described as a farmhouse lunch cheese made with nettles. And yes, it did taste very good. 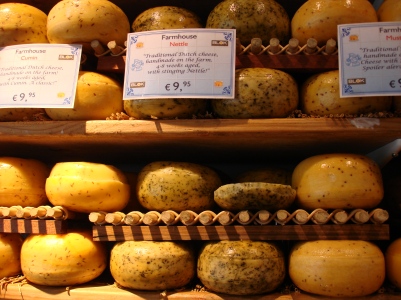 In the absence of Indonesian or Surinamese dishes, I organised my culinary itinerary around fruit breads and cheeses. 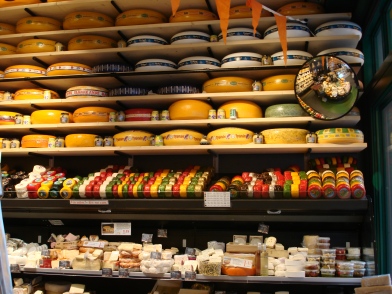