Foods go in and out of fashion. Right now kale and salted caramel are cool—cool being the operative word, because kale thrives in cold weather. It relishes overnight frosts; chilly conditions only strengthen its resistance (to pests) and improve its flavour.

No surprise then that it’s so closely associated with Scotland. There kale, or kail as the Scots usually spell it, not only denotes the vegetable itself, but is also a synonym for broth, or even supper. Not to mention the literary movement dubbed the ‘kail-yard school’. This refers to a group of late nineteenth century novelists, the best-known of whom is J M Barrie of Peter Pan fame, who wrote stories of lowland life in Scots dialect.

Originally from the Mediterranean, grown by the Romans and likely spread by them during the course of their imperial conquests, according to Samuel Johnson, kale wasn’t actually introduced to Scotland until the latter half of the seventeenth century:

‘I was told at Aberdeen that the people learned from Cromwell’s soldiers to make shoes and to plant kail. How they lived without kail, it is not easy to guess; they cultivate hardly any other plant for common tables, and when they had not kail they probably had nothing.’ (Journey to the Western Isles of Scotland, 1775)

‘There’s cauld kail in Aberdeen
And castocks in Strathbogie … ’

‘Cauld kail’ is cold soup and ‘castocks’ are cabbage stalks, and those lines are from a song collected by Robert Burns in the latter half of the eighteenth century. A keen collector of lyrics, Burns often revised and extended them with verses of his own.

Brassica at its most basic—that’s kale or borecole as it’s sometimes known. It’s descended from the same wild ancestor as cabbage, but of the two, kale is the more primitive expression. At school we learnt that European peasants of the Middle Ages had a pretty miserable existence and lived on roots and tough, bitter-tasting leaves. Now I’m older and more widely read in history and matters culinary, I know that the roots were root vegetables and the leaves were kale. Not only because kale survives whatever the elements throw at it, but because ‘headed’ or ‘hearted’ cabbages weren’t developed until the end of the Middle Ages.

I have a soft spot for those hardy, northern vegetables. Kale leads me down a dimly-lit path to a library of unusual Scottish words. As well as a hardcore fudge called tablet, there’s dreich which means dreary, as in: It was a grey, dreich November day. Drookit for soaking wet. And my favourite Scottish word, peely-wally, which means pale or off colour.

According to Jane Grigson, kale is one of ‘the nastier aspects of the cabbage clan.’ I don’t agree with her, but echoes of that parental refrain ‘eat up your greens’ do surround it. Or did before kale’s makeover. Championed by chefs, celebrities, and celebrity chefs, kale flipped from worthy to trendy. Now it’s everywhere: high end providores, local food fairs, farmers’ stalls, green grocers, even supermarkets.

Until kale’s recent narrative shift it reeked of institutional catering and poverty. Boiled cabbage together with stale air and piss were the signature smells of institution corridors. It was cattle fodder. Or belonged to the foodscapes of the poor: a cheap but nutritious ingredient in Irish colcannon, Portuguese caldo verde, or Dutch boerenkool met worst—kale mashed with potatoes and served with smoked sausage and mustard. It enjoyed a brief respite during the second world war’s Dig for Victory campaign when the public were encouraged to transform gardens, parks and sports fields into allotments to grow vegetables.

With its frilly petticoat leaves, a bunch of curly kale is a tempting purchase. The first time I bought some I ended up not cooking it, but using it in a flower arrangement. The next time, I did some research. Because I found the idea of green shakes or raw salads unappealing, I went looking for older recipe ideas. In The Cookery Book of Lady Clark of Tillypronie from 1909 I found Sir John’s Luncheon Kale which pulverises the cooked leaves and blends them with butter and cream. The Scots Kitchen: Its Traditions and Recipes by F Marian McNeill (1929) was an informative read, but suggestions like this one I found as unappetising as Gwyneth Paltrow’s grassy-tasting breakfast juice:

‘Put half an ox head or cow heel into a goblet with three quarts of water. Boil til the fat floats on the top. Take a good stock of kail, wash it carefully and pick it down very small, and put it into the broth … ’

After some experimenting and adapting, I came up with Pasta With Red Hot Kale. It goes like this: Blanche your kale or boil it for a minute, stalks and spines removed. Then cut it up small, and while your pasta (I use rigatoni, fusilli, or penne) is cooking, fry a couple of finely chopped red chillies and 2-3 cloves of garlic in olive oil. Add the kale, and sauté for a few minutes. Stir in ½ teaspoon of paprika—more if you wish. Season. Drain the pasta and add it to the red hot kale. Remove the pan from the heat, stir in some halved or quartered cherry tomatoes, a tablespoon or 2 of crème fraîche and about the same amount of grated Grana Padano. Mix up and serve with shavings of Grana Padano to taste. 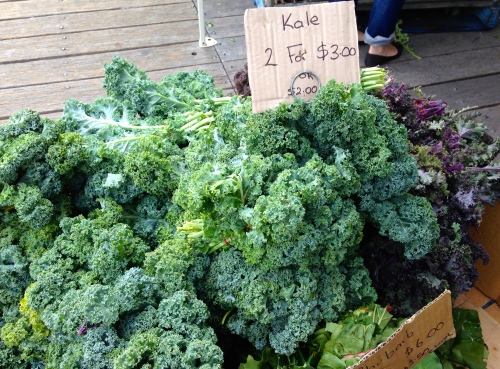 Charles Darwin was fascinated by cabbages and their kin. ‘Every one knows how greatly the various kinds of cabbage differ in appearance,’ he wrote inThe Variation of Plants and Animals Under Domestication. Later warning of their reckless promiscuity: ‘great care must be taken to prevent the crossing of the different kinds.’ If the pollen of the various brassicas intermixes centuries of selective breeding can come undone. Plant a cauliflower—get a load of kale.