It started for me with Meera Sodha’s chilli tofu recipe in The Guardian. Moved on to Tangra Chilli Garlic Prawns at London’s Darjeeling Express before expanding into Amit Chaudhuri’s Calcutta, and my own memory of visiting Kolkata in the late 1990s when my partner was a guest of the Calcutta Film Festival and I tagged along.

Chinese migrants arrived in the late eighteenth century, initially as sugar mill workers, then later as leather tanners, carpenters and other small traders. They pulled rickshaws and made shoes and soon became an integral part of the city’s multicultural fabric. The majority were Hakka from what is now Guangdong province, and it’s easy to imagine Kolkata’s Chinatown echoing to the clop of sandals and the click of mah-jong tiles, as workers congregated in local eating houses to swap news and eat dishes that reminded them of home. 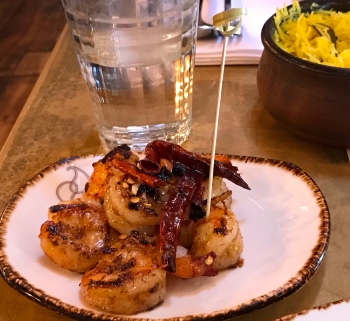 I like it not only for its hearty taste, but also because it challenges notions of ‘authenticity’. It’s neither echt Chinese, nor Indian as we know it, but something else. A relatively recent cuisine, a kind of culinary fugue, a distinct variety of Hakka cuisine adapted to the Bengali palate. (A fugue is a compositional technique in which a musical theme introduced by one part or voice is taken up by other parts and successively developed.) I wouldn’t call it fusion—which often involves cheffy flourishes and out-there combinations of ingredients—it’s more akin to home cooking. And I’m thinking here of the way home cooks adapt to changed environments and unfamiliar produce, deal with scarcity or glut; the way they use what’s available (and affordable) and make it into something they recognise.

Originally served up to cater for its own community, it wasn’t long before the Indian-Chinese menu found widespread popularity. According to Amit Chaudhuri:

‘Chinese food has long been Calcutta’s favoured foreign cuisine: it belongs to the eternal, and now paradoxically lost, childhood of the Bengali middle class. Its bottles of soya sauce and Han’s chilli sauce, its minutely chopped green chillies swimming in vinegar, its chicken sweet corn soup … ’

(Amit Chaudhuri is something of a favourite writer; his 1993 novella-cum-meditation, Afternoon Raag, is a book I re-read an a regular basis.)

Cities taste of their culinary histories and Sydney is no exception. A quick Google and I’ve located two Indian-Chinese restaurants in the Parramatta/Harris Park area. Already I’m off thinking noodles and fried rice loaded with garam masala and green chillies. Gobi Manchurian, chilli paneer, the kick of cumin and black peppercorns …

Kolkata’s Tangra or Chinatown is apparently changing as younger generations move on. While plans to turn the neighbourhood into a tourist district may slow the exodus, the popularity of Tangra’s unique cuisine continues to grow apace.

I like this Indian-Chinese amalgam it because it remains me that a cuisine is never fixed for all time, that tastes and dishes evolve—and are meant to evolve. And that flavours and cooking techniques change not only because of migration, but for a host of other reasons too.